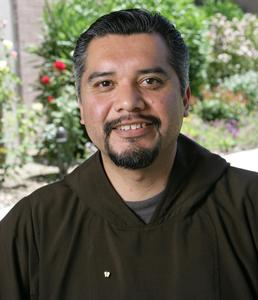 We mourn the passing and celebrate the beautiful life of our brother, Fr. Jesus Morales Vela. Please click here for more information.
Fr. Jesús Morales Vela was born in Los Angeles, California on May 19, 1962 the son of Jesús Vela and Julieta Morales. He entered the Capuchin Order on August 15, 1991 at Santa Ynez, CA. He was ordained a Catholic priest on June 13, 1998 at St. Bede the Venerable Church in La Cañada-Flintridge, CA.
Before he entered the Capuchin Order he received a Bachelor of Science from California State University Los Angeles. He then received a Master of Divinity from the Graduate Theological Union in Berkeley, CA. After his ordination Fr. Jesús was sent to Old Mission Santa Ines in Solvang, CA to serve as associate pastor. Afterwards he was associate pastor at St. Lawrence of Brindisi in Los Angeles and Vocation Director at San Lorenzo Friary in Santa Ynez. He then returned to St. Lawrence of Brindisi as associate pastor and in 2008 became Pastor of St. Lawrence of Brindisi Church in Los Angeles, CA and served as a chaplain for the Los Angeles Police Department. He served on the Provincial Council and was elected Vicar Provincial. In 2017 he served as Chaplain at St. Francis High School in La Cañada-Flintridge, CA where he died suddenly after suffering from some ailments on May 25, 2018.
Fr. Jesús was an extraordinary Capuchin priest: the essence of kindness who radiated and shared joy and peace in a most Christlike fashion. He always demonstrated a loving zeal for the poorest of the poor. He served the people of God as a herald of hope and true instrument of peace. He lived the Gospel life with selfless dedication and heroic love.
His mother, father and older brother Alfred have gone before him but he is survived by his brothers and sister: Juan, Alberto, Daniel, Isabel, Ernesto and Oscar.
Viewing will be held at St. Lawrence of Brindisi Church, 10122 Compton Ave., Los Angeles starting from 4:00 pm on Monday June 4, 2018. A Rosary will be prayed at 7:00 pm that evening. Funeral Mass will be there at 11:00 am on Tuesday June 5, 2018. Mass of Christian Burial will be at Old Mission Santa Ines, 1760 Mission Drive, Solvang at 10:00 am on Wednesday June 6, 2018 followed by burial at San Lorenzo Friary, 1802 Sky Drive, Santa Ynez, CA.
In lieu of flowers the family requests that you may consider making a donation in memory of Fr. Jesús Vela to Capuchin Franciscan Order, 1345 Cortez Ave., Burlingame, CA 94010 and St. Lawrence of Brindisi Church, 10122 Compton Ave., Los Angeles, CA 90002.
Print