Our Lady of Angels of Portiuncola Feast Day 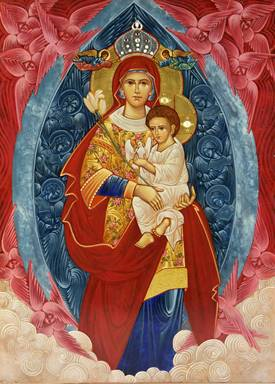 As we celebrate the patronal feast of the Western America Province, Our Lady of Angels of the Portiuncula, know that you are remembered in our prayers and Mass intentions.
Dear Brothers, Sisters, Family and Friends:

As we celebrate the patronal feast of the Western America Province,

Provincial Minister
Capuchin Franciscan Order of California
Western America Province of Our Lady of Angels
1345 Cortez Avenue
Burlingame, CA 94010
Our Lady of the Angels – at the Porziuncola: “Under the mantle of Mary our Mother.”

On August 2, the Franciscan family throughout the world celebrated the 800th anniversary of the granting of a Plenary Indulgence to St. Francis of Assisi and applied to his humble Porziuncola chapel.

The Porziuncula is the little chapel that was used by St. Francis for private prayer, which is now located inside the basilica of Our Lady of the Angels in Assisi, Italy. August 2 observes the anniversary of the "Pardon of Assisi"–– the feast commemorating the plenary indulgence that Pope Honorius III announced for pilgrims to the Portiuncula. According to tradition, St. Francis experienced a vision of Jesus and Mary in the Porziuncula chapel on Aug. 1, 1216, during which he prayed that all pilgrims to the chapel would receive a plenary indulgence; the prayer was granted on the condition that he received permission from the Pope. The site is also believed to be where St. Clare – who founded the Franciscan Poor Clares – was officially received into the order by Francis in 1211.

The patronage of Mary extends across the world, like a beautiful mantle of love and protection. Here in California, that beautiful Marian patronage of grace is applied to the name of the Western America Province and to two of the Capuchins places of ministry.

For over eighty years the Capuchins have served God’s people at their parish of Our Lady of Angels located in Burlingame, California. More recently, since 2010, the Capuchins have held custody of the National Shrine of St. Francis of Assisi Church and chapel of the Our Lady of the Angels at Porziuncola Nuova - located in the North Beach area of San Francisco. It is at this site that the grace of the Assisi Pardon has been extended by the Plenary Indulgence.

In honor of this special day, the Capuchins at the National Shrine offered extended Masses and Confession for the assistance of Pilgrims who come to the Shrine seeking the grace of the Assisi Pardon. *(see; www.shrinesf.org for details)

Pope Francis also visited Assisi two days later (August 4) to celebrate the 800th anniversary of the dedication of the Portiuncula chapel. Last year, the Holy Father marked the Pardon of Assisi during his weekly Angelus address by stressing the importance of the sacrament of Confession. The feast "is a powerful reminder to bring ourselves closer to the Lord in the Sacrament of Mercy, and to receive Communion," he said during his Aug. 2, 2015 address.

St. Francis’ great desire was that all may enter the eternal joy of Heaven. He felt passionately that Holy Mary was the sure way to safeguard our life in Christ. Just as St. Francis petitioned Mary to hold his Friars under the mantle of her prayers - let us all confidently call upon Holy Mary as Our Lady of Angels, and plea: “Pray for Us”
Print