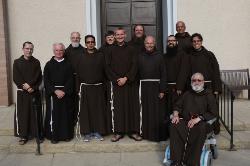 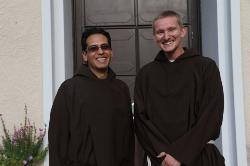 Two postulants, Nikolas Barth and William Cisneros, received their habits and entered the Inter-Provincial Program for Capuchin Franciscan Novices at the San Lorenzo Seminary in the Santa Ynez Valley. The investiture took place on Sunday, July 19, 2015.

Nikolas Barth was born and raised in Northridge, CA. ‘Niko’, as he is called, attended Catholic elementary and St. Francis High School in La Cañada- Flintridge. Niko says that after much time of prayer and reflection as a Capuchin postulant, “I discovered my vocation.”

William Cisneros hails from Santa Ana and attended Cal Poly, Pomona. What he read in the life of St. Francis resonated with him. “I had visited the Capuchin Franciscans and the Novitiate. After seeing the sense of community, prayer, being down to earth and enjoying life, it was an easy decision to apply.”
Print